“You are an IRONMAN!” These four words go through your ears and directly to your heart! It is hard to explain the feelings you have while running on the red carpet the last 20 meters of a 140.6 miles race and hearing for the first time the famous words: “You are an IRONMAN”. I can’t remember how many times I played this scene in my head anticipating the moment. But it was different, awesomely different!

As my first long distance triathlon, I chose IRONMAN Copenhagen. Mainly because it was late in the season (and I needed time to train), the swim was in protected waters and the bike/run courses were rather flat. It was a perfect choice for my first IRONMAN race. With few exceptions, after the event most people asked if I am still able to move. To my own surprise, the race itself was easier than I expected.

The weather helped a lot. It was rather cold, about 18-20 degrees Celsius, so it was easier to eat and hydrate. I mostly trained in 30-35 degrees Celsius temperatures and I had more exhausting training sessions than the race. Don’t get me wrong, it was not “a tea party” (as also mentioned on the back of the finisher medal). Thirteen hours of effort is hard work! But rigorous preparation paid off. Although slightly below what a typical IRONMAN preparation plan asks you to invest, I spent 7-10 hours a week training for the 3 disciplines of triathlon: swim, bike and run. A word of warning: do not attempt to do this without your family buy-in! Looking back, I value the training journey as much as the race itself. At some point during the last 10k of the run I was thinking: this is soon over… now what?

For me, the entire event went smooth and according to the plan. It was almost boring 🙂 I was expecting a rainy day but after a shower during the night, at 6 AM I could see some clear sky above and my spirit was high! At 7:41 AM I got in the water for the swim part. The salty water of the Amager Strand was as best as you can get: 18 degrees Celsius and calm. I swam the 3.8 km in 1h and 19 min. My best-case estimation.

I did not hurry during Transition 1 as I preferred to make sure everything was in order for the long bike ahead. It took 16 minutes to get myself from the water to the bike. As I expected to have mixed conditions on the road, I reduced a bit the pressure in the tires, decision that proved to be a good one. I saw quite a few flat tires and one serious crash, but I was spared of incidents. Moreover, around 2 km into the bike I could see from the distance the lovely pink of my wife’s jacket 🙂 Don’t waste an IRONMAN by not having your loved ones by your side!

Nutrition and hydration on the bike are key success factors of any IRONMAN race and during training I had troubles in finding the right balance. Finally, I chose to go for mixed nutrition plan (energy bars + fruits juice) and in the special needs bag I had some goodies: salty pretzels, 2 small sandwiches and 1 alcohol-free beer. These helped me to fight the sweat taste fatigue. Six hours and 25min from T1, I handed over the bike to the volunteer in Transition 2.

It took another 14 min to get ready for the run. Both transitions were rather long but in the equation of day-long race, they don’t count as much. Once out of T2 the most interesting part of my race started. First, because I never ran a full marathon (during training I never exceeded 30 km) and second, it started to rain. And it rained for almost the entire duration of my run. I had a rain jacket for the run, but I decided to leave it in T2. It was a good decision as the rain kept me cool and fast. The only problem was the water in my shoes, as I was afraid of serious blisters. I had dry socks in my running special needs bag but, even the rain stopped for a while, my shoes were so soaked in water that it was pointless to put dry socks.

But I loved the run! I was fresh and fed enough to enjoy it. And the atmosphere in Copenhagen was amazing. Despite the rain, people were cheering us up along the entire length of the run course. I was truly impressed by the people! My wife endured the rain and cold, and besides emotional support she also got me some great photos! To maintain my good mood (and to look good in the pictures) I was repeating myself from time to time: Run tall, run light and smile 🙂 And it worked like a charm. I completed my first marathon in 4h and 37min.

After 12h and 52min since entering the water, I stepped on the red carpet of the finish line. I did not pay too much attention to the overall time until the last 10km of the run, when I realized that I can complete the race in less than 13 hours (my unofficial goal). I greeted the crowd and enjoyed every step on that red carpet! If you want to see pure joy, go the finish line of an IRONMAN race. During the last hundred meters of the race I tried to get some space between myself and other participants so I can hear my name 🙂 It didn’t work perfectly as it was quite crowded at the finish line but, I could definitely hear: Bogdan, YOU are an IRONMAN! And it went straight to my heart! Awesome!

I learned several things out of this entire seven months experience: 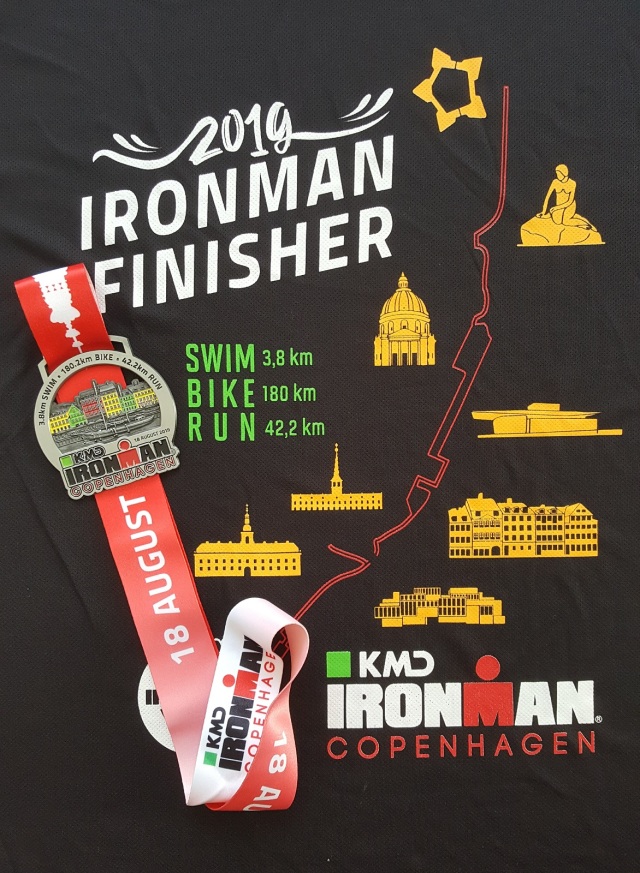